In English, please! – The Defeat

In: English Section, USA
With: 0 Comments 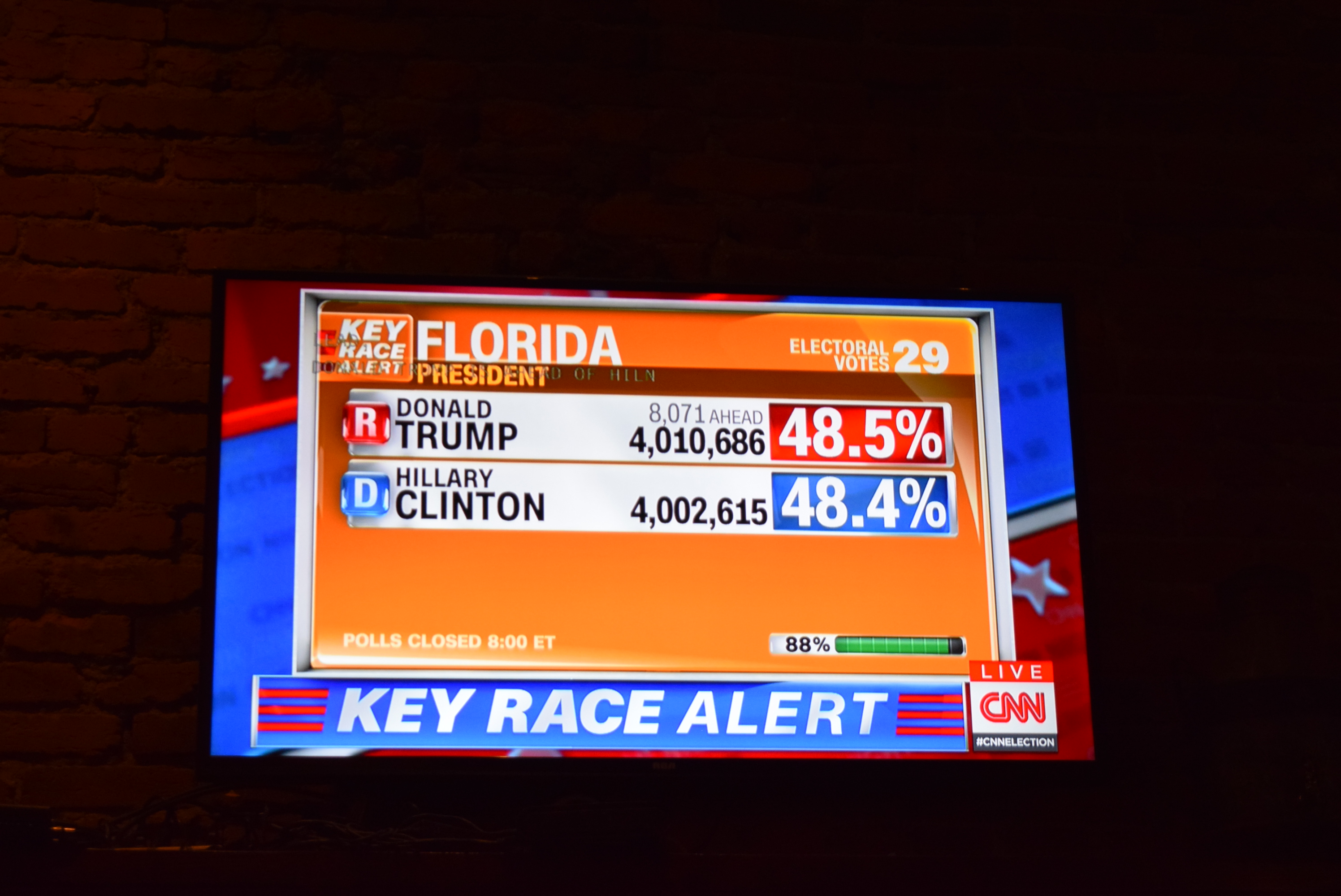 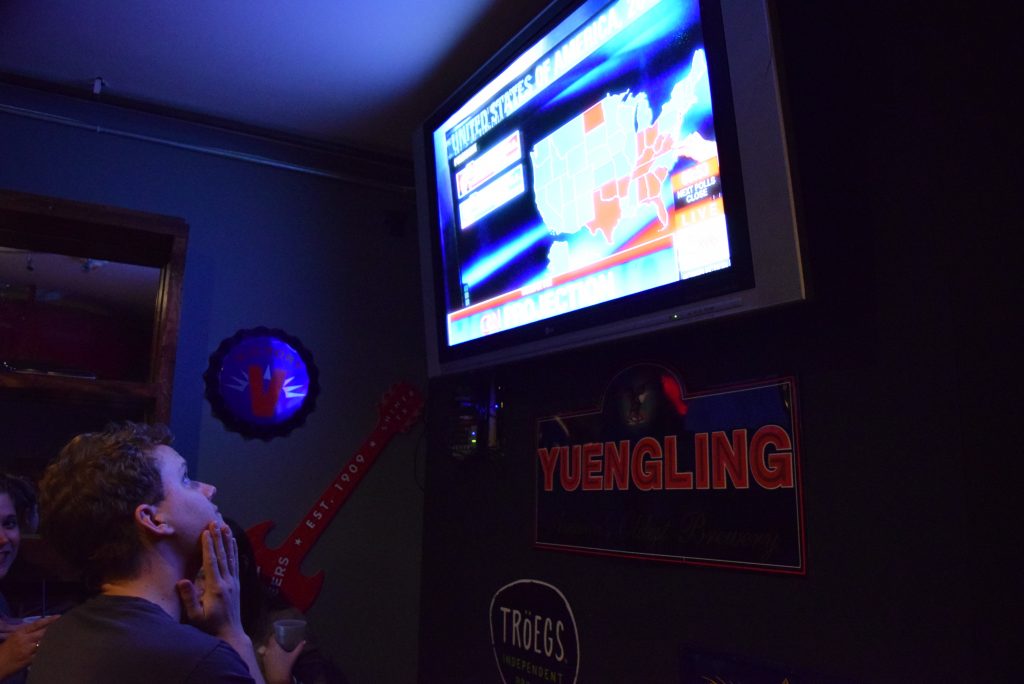 They came to celebrate, they went in tears. Young democrats thought they would witness history – the first female President of the United States. But they witnessed history going all the wrong way in their tearful eyes. In one of the biggest political uproars in American history, they saw the election of Donald Trump.

The evening begins cheerful. Around 100 people had gathered in the Sudhouse, a two floor pub in U-Street. The chairs, tables and bar are made of dark wood, the flags of the United States and the District of Columbia are hanging above the full stocked bar and everywhere in the pub: TV-Screens with CNN. Burgers and fries leave a trail of tasteful smell in the room, as waiters carry them to the young democrats. They talk, they smile, they are having a good time – looking forward to an even better time. A better time they had worked hard for.

“I’ve spent this last weekend going door to door in Virginia“, says Stephanie King, 24, blond hair, red dress, with a glowing face and a sparkle in her eyes. “My little step tracker said that we walked 15 miles on Sunday, going door to door. We wanted to make sure that voting is accessible to everyone who wants Hillary as our next president,“ King, who’s working as a political director for a pro-choice woman organisation, continues.

A giant paper map of the USA hangs on the wall behind King, with all the 50 states up for graps. At 7pm, CNN’s Wolf Blitzer announces the first results. Stephanie King and a friend pick up a red and a blue felt pen and mark the states on the map that had just been called. Indiana and Kentucky turn red on the map, Vermont blue. Everybody expects that blue will be the dominant colour on the map. But the tension rises.

“I’m very anxious and nervous“, says Grace Felly, a student at Georgetown, leaning to the wall next to the paper map. “But I also feel confident that she’s gonna win. I just want it to have it already.“ Felly supports Clinton, because she thinks, Clinton has a lot of experiencce and knows what she’s doing. Stephanie King makes the same argument.

“Clinton is someone with a record of public service, a record of being a leader, record of being a stable hand,“ King explains. “Additionally, I’m a big supporter of a lot of her policies that are pushing towards making a lot of things available to a wider audiences, whether that’s…“ Loud cheers interrupt King. It’s 8pm and Clinton has just won a couple of states on the East Coast, including Maryland, the home state of King, and the District of Columbia. The blue pen is working hard and King expects more work for it.

“Right now Clinton leads in North Carolina, Virginia and Florida“, she describes the numbers she’s seeing on the TV-screen. “We will see, if that’s hold up. But, assuming that we do well in some of these closer East Coast battleground states, that will really set the tone as we go west, to some of the states that historically haven’t been as close, but potentially could be this time around.“

A right and wrong prediction

At this point, King is referring to states like Arizona or Utah, states, that are normally Republican. But polls had showed that Clinton could have a chance to win there. But that was two weeks before the election. None of those states will eventually turn blue.

But King is still right with her projection, that the results on the East Coast are an indicator for the rest of the country. But it‘s an indicator for a Trump win. King’s and all of the other Democrat’s faces turn into stone, as they see what they didn’t expect and can’t understand. Trump takes the lead in Florida. In North Carolina. Then Trump catches up in states that no Democrats had even doubt about. But Michigan and Wisconsin, part of Clintons blue wall in the North-East, begin to crack.

“The margins aren’t looking great in a lot of the states we would like to winning,“ says King with a concerned face. “It’s not by any means out of questions, but it is definitly to close for comfort.“

While the results don’t give any comfort, the democrats are searching the comfort of each other. They hug each other in disbelief, King strokes the back of her friend. They still hope that this is a nightmare they all wake up from. But shortly after 10pm, Stephanie takes the red felt pen and marks Florida red. Then, one last celebration. California is called for the Democrats. But the celebration is forced, the shouts ebb away quickly.

“It’s a rough night,“ admits King. The sparkle in her eyes is gone. “We still have a chance in Philadelphia, but we are not holding out strong hope at this point.“
The Democrats are watching silently the demise of their hope. There are almost no conversations, the only voice to be heard is the sonorous, breathless voice of Wolf Blitzer announcing the results. Trumps leads – and wins. In Michigan. Wisconsin. And then Philadelphia.

Many Democrats go home, some tears rolling down their cheeks. What started as a festivity is now a funeral. Some are staying. Katie Turner, a 19-year old student, still sits on a window board. She’s queer, transgender and watches the numbers in horror.

“It’s been so exciting to see all the improvements in queer-rights and having go back that a little bit is terrifying to me“, Turner says with a shaky voice. “I wanna be able to marry in my home state, I wanna be able to love who I wanna love.“

Then, she’s leaving. Just like Stephanie King. She rips down the map that shows the political destiny and rolls it up – remarkable carefully, almost like a roboter, as if she’s looking for a way to bring order to the chaos. Without a further word she leaves the Sudhouse. She doesn’t see how Donald Trumps appears shortly before 3am to hold his victory speech.