In English, please! – The Incarnation of Idealism

In: English Section
With: 0 Comments 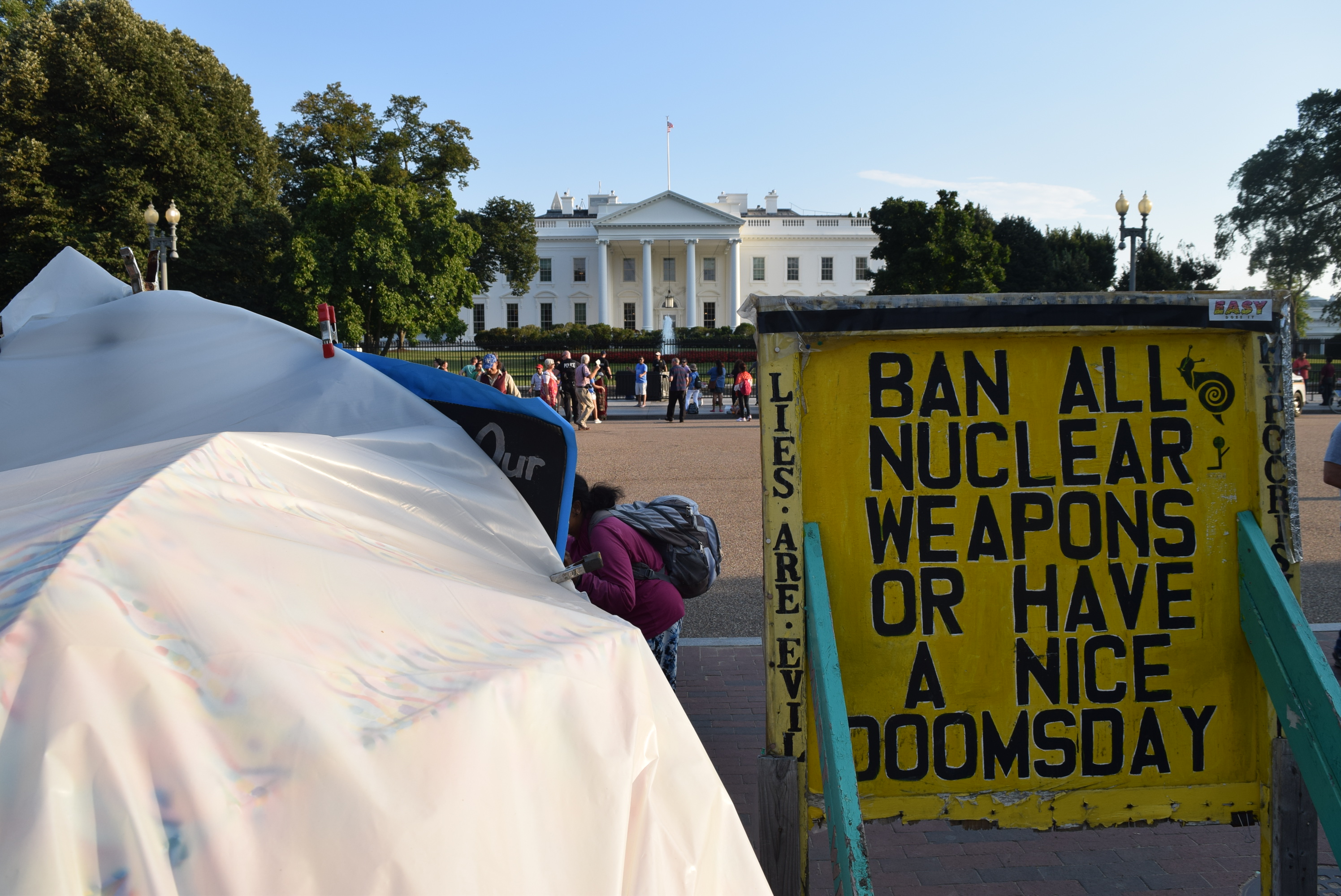 The Incarnation of Idealism

It’s a typical Wednesday afternoon in late August in Washington, DC. The sun is setting and paints the White House in a bright orange light, with a clear blue sky in the background. It’s the perfect scenery for tourists to take selfies. And they do. Indians, Chinese, Germans – they take out their smartphones, hold it in front of their faces and smile. They are taking pictures of one of the symbols of democracy in the United States. And by doing that they unknowingly face another symbol of democracy.

As soon as the tourists take their eyes of their screens they see Phillipos Melaku-Bello, a 54-year old man with brown dreadlocks, a brown beard with big patches of grey and a yellow hairnet on his head. He appears to be a classic textbook hippie from the sixties. He sits across the street in front of a white tent, framed by two wooden walls with pictures attached to it. One of them shows a child lying in rubbel, burned to death; another one shows a baby with deformed legs and two stumps where there were supposed to be arms. The white tent is also surrounded by protest signs. “War is not the answer,” says one, “No 2nd Fukushima” another. Two signs that sum up the message and purpose of the longest lasting vigil of modern time.

“This is a protest for World Peace and against nuclear Weapons!” Melaku-Bello greets every tourist who gets closer to the vigil with these words. He has said this sentence thousands of times since he sat here for the first time. It was back in 1981 when activist William Thomas started the vigil across the street from the White House. At first, he sat alone in his tent but soon he received support. Melaku-Bello was one of the first volunteers to take Thomas’ seat so the founder of the vigil could go to the restroom, get a meal or a good sleep away from the vigil. Staying awake at the vigil was and is crucial, as Melaku-Bello explains. “I’m not gonna say sleep never happens, but by law we’re not supposed to sleep here.”

Due to the other volunteers William Thomas was able to continue his protest until he died in 2009. Then his long time friend and co-activist Concepcion Picciotto became the face of the protest. She died January 2016. Now Melaku-Bello continues the work with the help of four other men. Up to 100 hours a week Melaku-Bello sits in front of the tent, sometimes 17 hours in a row. In blistering heat, heavy rain or freezing blizzards. He and his co-activists have to do that. As soon as they abandon the vigil, it could be removed. But as long as one of them is present, no one can dissolve the protest. A lesson Ronald Reagan had to learn during his time as president. He sued to remove the vigil but lost to William Thomas. “We have the right of freedom and expression and we were here long enough to legally claim territory,” says Melaku-Bello. There is a hint of proud in his voice when he tells this story.

Still, it takes the upmost idealism to devote so much time to sitting across the White House. But Melaku-Bello is probably the incarnation of idealism. It’s in his blood. His father was also an activist and took him to South Africa to protest against the apartheid in the seventies. Then Melaku-Bello started working for the King of Ethiopia. He travelled around the world and filed reports on human rights violations. He saw what war could do to people. And to him.

In 1982, Melaku-Bello travelled to Ramallah, Palestine. One day he stood next to a fence, when an eight- or nine-year-old boy climbed the fence. The boy ran across a field, retrieved a football and kicked it over the fence to his friends. Seconds later, the boy was dead. He stepped on a landmine. The blast wounded Melaku-Bello as well, forcing him into a wheelchair. It was the point of no return for Melaku-Bello and his fight for world peace.

“I would be a hypocrite of what I’ve seen with my own eyes if I didn’t do something about it,” he says, watching a family from Africa with two children taking pictures. “Look at these beautiful children! They deserve to be able to be 100-years old”. Sometimes, it’s a lonely mission. Melaku-Bello recalls people who would say that the activists at the White House are doing nothing. “The thought of one person has always been the thing that eventually changed government, thought, believe,” is his answer to that.

Melaku-Bello is sure that the protest has impact, he says, looking at a man who studies the gruesome pictures on the wooden wall.  “When we started, not one nuclear warhead was disarmed. Since that time 10.695 warheads have been disarmed. We can hold our head up high.” Therefore, he will continue his protest. Until the world has reached “nuclear zero”, meaning that there are no nuclear weapons left that could be used. Then he would consider leaving. But till then, he will be sitting across the White House, surrounded by protest signs and looking at the people he’s fighting for. “The protest is basically me saying ‘I love you’ to all civilians of the planet. So if I can love some 7.2 billion people I’m gonna keep on doing it.”